As the prevalence of hypertension increases in adult Nigerians, achieving target blood pressure (BP) control has become an important management challenge. High salt intake is an important risk factor for hypertension and its high intake prevents adequate BP control. This study aims to explore the knowledge of salt intake and blood pressure control among hypertensive patients. Data were collected from a cross-sectional sample involving 564 adult hypertensive patients that were followed for at least 3 months prior to recruitment to this study. Data collection comprised interviewer-administered structured questionnaires about demographics, knowledge and practices related to salt, followed by measurement of blood pressure. A majority (92.9%) of the respondents knew that eating too much salt could affect health and less than one-half (40.1%) actually knew that not more than one teaspoon of salt should be consumed daily. Nearly all respondents (516) knew high BP to be a possible consequence of high salt intake. Among those that took a lot of salty food, 87.7% and 78.5% had high systolic BP and diastolic BP respectively. Although the majority of respondents were knowledgeable about the adverse effects of salt, few knew the daily intake recommended value. The higher the dietary salt intake, the higher the chances of having poor BP control. Increased knowledge about recommended salt intake and individual guidance could be important for reducing salt intake in hypertensive patients.

lobally, a causal link between sodium intake and high blood pressure levels is well-established.1,2 Excess sodium intakes is associated with increased blood pressure3. Hence, salt consumption is important among patients with hypertension. Evidence suggests that modest reductions in dietary sodium could substantially reduce cardiovascular events and medical costs, and should be a public health priority.4 Internationally, calls have been made for dietary sodium reduction to be a major intervention for prevention and control of non-communicable diseases.5 The World health organization (WHO) recommends consuming sodium no more than 2 gram/day or 5 gram/day for salt intake among hypertensive patients.6,7 People with cardiovascular diseases, as well as hypertension, should reduce and limit salt consumption.6,8 It is known that low salt intake is challenging and difficult to follow.6,9 As a result, the excessive salt and sodium consumption is often unpreventable. Overconsumption of salt has positive correlation with blood pressure. Patients with hypertension will have higher systolic and diastolic blood pressure if they cannot control their daily salt consumption.8  Identification of dietary salt along with understanding the knowledge, attitude and behaviour related to salt are the first steps in reduction of salt consumption.10  As clinicians, we have always tried to use a paternalistic (parent–child) approach to counsel the patients to reduce dietary salt intake. It is usually done in a clinic setting. For this reason, the response has not been up to the desired extent. It requires much more than an outpatient department‑based doctor–patient interaction.

This was a descriptive cross-sectional study conducted in the Family Medicine department of the Federal Teaching Hospital, Ido-Ekiti. Ekiti State. This tertiary level healthcare facility provides medical care and serves as referral center for other health institutions in the state and environs.

The participants were hypertensive patients aged 18 years and above, and have been on treatment for at least 3 months, excluding those with co-morbidity, complications of hypertension, pregnant women, and critically ill patients.

A minimum sample size was statistically determined for the study, and 564 participants were recruited, using a hypertension prevalence rate derived in a study done in Osun State, Southwestern, Nigeria.12 with the confidence interval of 95% and standard error of 5%. Systematic random sampling technique was used to recruit participants among the hypertensive patients attending the clinic.

Pretested semi-structured questionnaire drafted in English Language and translated in Yoruba (local language) and back-translated into English was used to obtain relevant information on characteristics of respondents, knowledge, attitude and practices about salt intake.

Data collected were entered into and analyzed with SPSS 20 software (SPSS Inc., Chicago, IL, USA). Frequency tables and diagrams in the form of charts were generated for relevant variables. Means, standard deviations (SDs), proportions, and percentages were determined as appropriate. The means and SD were calculated for continuous variables while categorical variables were summarized using proportions. Test of significance was done using Pearson’s Chi-square test. P ≤ 0.05 was taken to be statistically significant.

Figure 1 showed that nearly all, 92.0% (516) of the respondents knew that high BP is a possible consequence of high salt intake, while just above one-third, 35.6% (201) believed it can result in Stroke, and only 5.5% (31) of respondents did not have knowledge of any possible health consequences. Table 2 showed that more than three-quarters {57 (87.7%) and 51 (78.5%)} of all respondents that took salty food a lot, likewise nearly all {39 (92.9%) and 38 (90.5%)} of respondents that added extra salt to food a lot, had high systolic and diastolic BP respectively. This showed that the higher the dietary salt intake, the higher the chances of having poor BP control. The differences between high and normal SBP and DBP respectively for salt intake practices were statistically significant (p<0.05).

Table 1: Assessment of Respondents’ Knowledge and Practices of Salt Intake 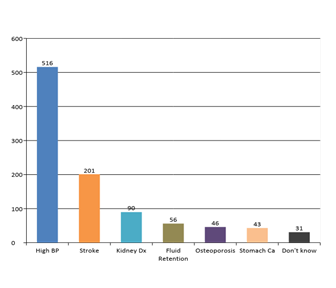 Figure 1: A bar chart showing the perceptions of Respondents on possible health consequences of lots of Salt Intake (multiple responses)

Studies that have explored knowledge and practices of salt intake and its effects on health in Nigeria and developing nations are scarce. In this study nearly all respondents (92.9%) knew that eating too much salt can affect health. This is similar to what was reported in America (90%), but higher than that reported in Australia (62%).10,14  In the same vein, 92.0% knew that high blood pressure is a possible consequence of excessive salt intake, just as similarly reported among Australian women,14. The finding in our study was expected since all respondents were on follow up for hypertension and might have been counselled on the effect of high salt intake and the benefits of low salt diet. The results implied high awareness of salt intake and its consequences.

In contrast most participants remarked that they had already limited salt intake, which might reflect inappropriate understanding. Remarkably the awareness of salt and sodium consumption did not ensure sufficient knowledge. Previous studies in American countries found similar findings.10, 15, 16 In Grimes et al., 73% of participants were not informed of the maximum allowed amount of salt17. Lack of knowledge is one of the other barriers to reduce sodium intake in patients. Information concerning an appropriate understanding of recommended salt intake and the importance of salt reduction program are necessary for successful treatment. In a qualitative study a patient said that “my doctor said that I do not add salt to food, and I have no other information” 18,19. Merely writing a single line prescription “decrease salt in diet” will not change the food behaviour of the patients, overnight. Changing food behaviour is not an easy task. It takes time and sustained effort. In fact, salt reduction is beneficial in both normotensive and hypertensive people. A review of randomized controlled trials found that reduction of salt 1 g for at least 6 months’ period cause a reduction in systolic and diastolic pressure by 1 mmHg in normotensives and by an average of 2–4 mmHg in hypertensive patients.20- 22

Just as was reported among Shandong residents2, those who were aware of the links between sodium and hypertension were more likely to take action towards sodium reduction.

Although patients were knowledgeable about the possible health consequences of salt, low rate knew the daily intake recommended value. The lower the dietary salt intake, the higher the chances of having good BP control. Increased knowledge about recommended salt intake and individual guidance could be important for reducing salt intake in hypertensive patients.

Limitation of this study includes self-reported attitude and practices of participants for having low or high sodium diet, which may overestimate or underestimate their actual attitude and practices related to sodium consumption. As a cross-sectional study, the findings could only be used to examine associations and not to draw inferences regarding causality.

3.       Sarmugam R, Worsley A, and Wang W, “An examination of the mediating role of salt knowledge and beliefs on the relationship between socio-demographic factors and discretionary salt use: a cross-sectional study,”The International Journal of Behavioral Nutrition and Physical Activity. 2013; 10:25.

18.   Sheahan SL and Fields B. Sodiumdietary restriction, knowledge, beliefs, and decision-making behavior of older females. Journal of the American Academy of Nurse Practitioners.2008;20 (4):217–224.